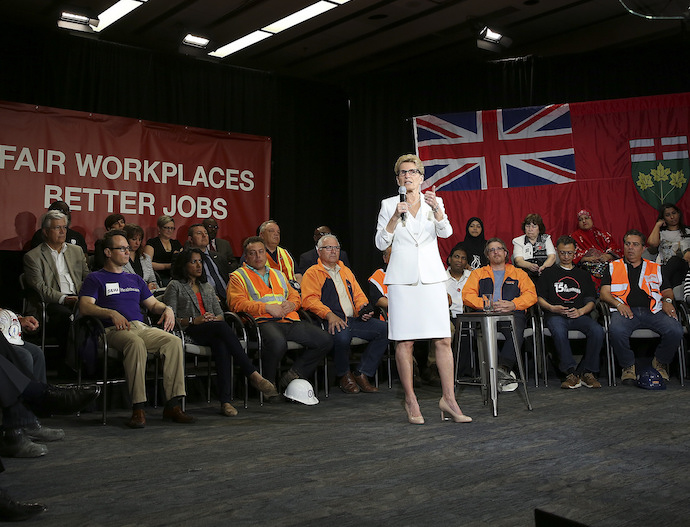 The Ontario Liberal Party is committed to a thriving economy where everyone benefits from growing prosperity. Even though the economy overall is strong and growing, we know that not all people of Ontario are feeling the benefits of that growth. Our plan for fairness and opportunity must seek to foster inclusive growth through policies that support a dynamic and innovative economy. We need your best ideas about what those should be!

Government to encourage and give incentives to corporations to engage seniors in innovative ways to make use of their knowledge and experience. This will benefit the corporations and keep seniors active and able to give back to society.

I think People of Ontario will be benefit a lot if the Province hosted a forum where scientists, economists, and other specialists could have a dialogue where everyone learns more about the facts, the science, the solutions, and the best approaches that we should adopt.

Investment and Spending are the engines of economic activity. Capital that is idle for more than one year beyond certain thresholds to be taxed at a 2% -2.5% rate. Individuals and corporations would be encouraged to invest or spend into the Ontario economy and create jobs and spur economic growth & create wealth.

Starting a business is hard, and there are lots of people hustling in the gig economy. It's unproductive to make just $35K and have to get an HST number and start collecting / paying.

Ontario will miss out on breakthroughs in the fields of artificial intelligence, robotics and nanotechnology if the provincial government fails to allocate more money for research and development in nurturing these exciting emerging industries which have the potential to create literally millions of good paying jobs in just Ontario alone - if done properly. While countries such as China, South Korea and Japan have invested... more »

Sole proprietors whether current 2nd+ generation citizens or more importantly 1rst generation citizens MUST have start up cash made available ( Government / Bank partnership) to new entrepreneurs . I found this personally , very helpful in opening my 2 small stores using my funds and private qualified loans matched by the Government incentive loans. Service sector while dependant on manufacturing and production employment... more »

3 votes
7 up votes
4 down votes
Ideate

Through the use of government power, the LCBO and the Beer Store control almost all retail sales of alcohol in Ontario. This unjustly prevents many people from creating or expanding their own business to include alcohol sales. This type of action is a clear violation of the right of citizens to engage in trade with each other for mutual benefit. We are stuck with limited outlets, limited inventory, limited hours and high... more »

0 votes
4 up votes
4 down votes
Ideate

Locally-based service and other small businesses comprise 95% of all businesses in Canada and form the backbone of our economy. Yet there is very little programming in place, research being done is not made practical or communicated to the sector, and help is by no means evenly distributed across the province. There are many simple strategies that could help service businesses innovate, and prevent the high failure rate... more »

Tackle unemployment by reducing the length of the work week. This will also allow all Ontarians to fully enjoy the advantages of increasing productivity by having more free time. This has been repeatedly done historically, with western countries seeing a gradual reduction in working hours, with a simultaneous gradual raise in wages, from the nineteenth century to the 1980s. The end of this tapering off in working hours... more »

89% of the land in Canada is owned by the Crown. This is tremendous wealth that can be exploited and taxable. Either tax it in the hands of the crown or sell it off to individuals and corporations who can exploit it and pay taxes.

I believe that Ontarians should pay an extra two percentage point on the HST, bring it up to 15% from the current 13%, which would raise an extra $5 billion a year to keep local roads, bridges, highways, hospitals, schools, universities, community colleges, arenas and other infrastructure in better repair as well as to greatly expand such infrastructure as our population continues to undergo explosive population growth.... more »

0 votes
2 up votes
2 down votes
Ideate

Ontarians are fed up with corporate Canada. The average worker in Ontario is receiving a salary increase below the rate of inflation. We hear on the news corporate profits are bustling, TSX reached ANOTHER new record high yet our salaries stay stagnant and the cost of living increases. So I think a commission should be instated that will report to the legislature on why this gap exists and what can be done to resolve... more »

2 votes
3 up votes
1 down votes
Ideate

I feel we should adjust regulations around the use of hydrogen and helium ... in airships to enhance transportation in the north where there are fewer roads to enable access to remote communities like reserves ... With reduced shipping from ice roads In the added expense of airplane travel With limited cargo space. Airships are a reasonable response but are prevented from being developed due to regulations that are outdated... more »

Use arrow key to choose the Emoji. Press Esc to Close Emoji Picker. ×